Brought to my attention by Wizbang, a LiveJournal user got visited by the secret service following an entry about wanting the president dead. Luckily for her, she has (as of the writing of this entry) about 86 pages of comments, the majority of which are in support.

This is just reinforcement of the idea that my generation refuses to take responsibility for what they do and say. She wished Bush dead, Cheney dead, and everyone in the administration dead. 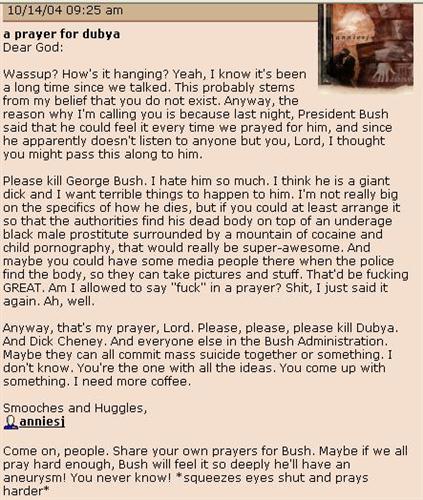 It’s fine to say whatever you want. That’s guaranteed under the first amendment. It does not give you free license to say anything without consequences. If you say something that wishes death upon the president, whether it be in a letter to the president, a speech to a militant group, a terrorist tape made by Osama himself, or even in a LiveJournal, you can expect to be investigated.

Let me explain this a little bit slower for those that don’t understand. Part of the problem when dealing with terrorist (or political) threats, is that it is hard to tell when someone is being serious. There are thousands of nut jobs who get their jollies by writing these letters, calling in bomb threats, and even issuing serious acts like the events of 9/11. It becomes incredibly hard to sift the real threats from the fake ones. Suggesting that this LiveJournal entry was obviously a joke is infantile. The moment such a threat isn’t followed up with at least a light investigation is the moment that threat is actually followed through. Guess who gets blamed in that case? The Secret Service for not investigating. Either they’re taking threats too seriously (as they supposedly were in this case), or not enough (in the case of 9/11). You can’t win.

Now we must broach whether what she said was constructive in any way, shape, or form. The fact is, no, it wasn’t. It wasn’t original. It doesn’t point out some new fact that should have some kind of bearing on how people vote. It didn’t give a fresh new perspective. It didn’t present a new opinion. It didn’t reinforce an existing opinion. It did nothing to contribute to what is supposed to be nation-wide, collective, political discussion.

I shouldn’t be all too surprised considering this comes from a LiveJournal account dedicated to Harry Potter. It is tough being 10. I used to lash out at people and public figures that frustrated me. I lacked all verbal and mental ability to lash back in a meaningful way or even articulate my feelings in a mature way. I was forced to resort to “I wish you’d die.” The sad thing is that she is a little less than a month older than me. It’s just more proof that some people mature faster than others.