I’ve been a big fan of Adium for some time now (ever since its very first release so long ago). It was the first and only Instant Message client to properly use the dock. With a quick glance, you could tell who just signed on or off, who was messaging. Because it was in the dock, you didn’t need to switch out of your current application to see notifications. The effect was also minimal, causing little distraction or taking up any screen space.

Alas, it was not without its failings, most prominently its lack of file transfer support and the ability to read away messages. The latter was nearly impossible to go without. It was an unfortunate side effect of the protocol being used. I was forced to move to iChat until this was addressed.

That brings us to Adium 2 (whose current number is less than 1, which I agree is confusing in many ways). Adam Iser, the author of the original program, made Adium into a Sourceforge project. This doesn’t work for all projects, as some just get neglected. However, after a slow start, their team started making headway, allowing users to download and compile their own copy off the development CVS. They now churn out regular milestone builds like any good open source project.

The most recent milestone (0.7) which is available at their website has some impressive features and though they may not agree, I think is ready for primetime and general use. The level of customization is unparalleled in any other product and save for audio/video and file transfers, is feature complete.

To go along with this customization, Adium has an excellent “Xtras” site to host them all. I personally have my own preferences, which I will post screenshots of once I get home.

Adium isn’t just an AOL Instant Message client either. It also supports: * MSN Messenger * Yahoo Messenger * Jabber (which according to rumor will be added to iChat) * Gadu-Gadu * Rendezvous * .Mac * and more

It also supports plugins, including one for the previously mentioned Growl. The possibilities are truly endless.

Honestly, this is the single project I’d like most to get involved with if I could only motivate myself enough to get Cocoa and Objective-C down pat. 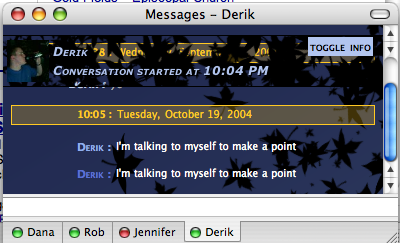